These maturities performance figures have been significantly pulled down by two products that delivered a significant loss for investors. One of these was a product linked to the FTSE 100, but also the S&P GSCI Crude Oil Excess Return Index, which saw a fall of 76.21%. This defined the outcome of the investment, with the plan only returning 23.79% of investors' original capital. Weakness in emerging markets resulted in a loss for the Merchant Capital Kick-Out Plan: Emerging Markets Issue 3, which was linked to the Hang Seng China Enterprises Index, iShares Brazil Index Fund and MSCI Singapore Free Index. The plan returned only 33% of investors capital. The other two losing products which returned 95% of investors’ original capital were linked to a basket of four agricultural commodities.
The top performing products to mature in the first quarter were the Investec FTSE 100 Geared Returns Plans 22, & 23, which both matured delivering a 70% gain at the end of their respective five year terms. This is equivalent to 11.16% per annum. These growth plans offered the 70% gain at maturity if the FTSE 100, subject to averaging over the final six months, was higher – which it was, albeit by only a few percentage points. The best performing capital ‘protected’ product was the Barclays Commercial Property Plan Issue 1, which made the maximum return of 60% over six years – an annualised return of 8.14%. The terms offered 1.25 times the average rise in the FTSE EPRA/NAREIT Developed Europe Index and the iShares Dow Jones US Real Estate Index Fund. The FTSE index jumped 67%, while the iShares index rose nearly 59%.

Given the strong consistent performance of FTSE 100 only linked products reflecting a bull market in this UK index over the years, it is worth considering how structured products would fare with less than favourable performance of the FTSE 100. Structured products have capital protection barriers, which define how far the market can fall before the original investment capital is impacted. Lowes Financial Management's StructuredProductReview.com. plotted the barriers of the over 600 FTSE 100 linked products in force, which shows that despite the retracement in the FTSE 100 since the highs of a year ago the index still has to fall by a further 40% before original investment capital is potentially impacted on any structured product distributed through the Independent Financial Adviser sector. The strength of such capital protection on structured products linked to the UK index is clear, as in such a situation of severe market falls, the majority of other investments would not go unscathed. 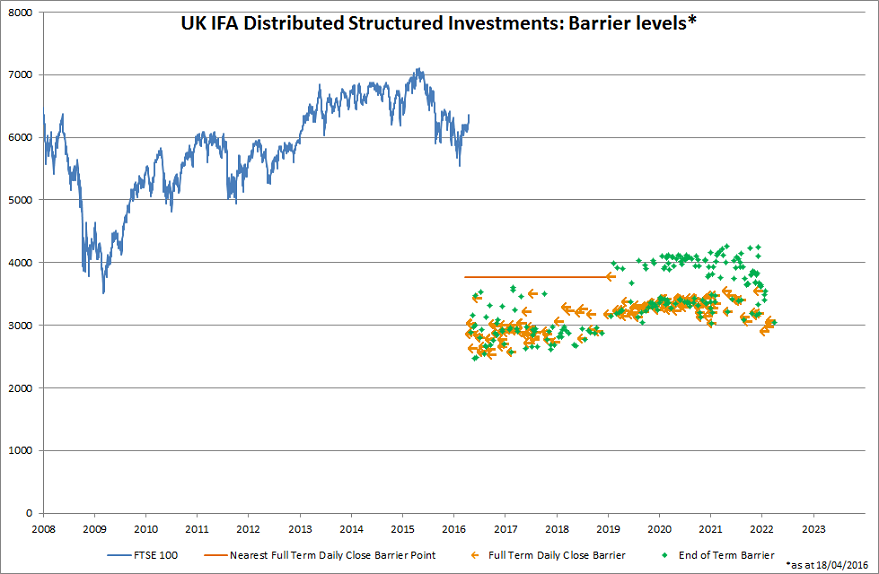 We can see that the nearest barrier to current levels is a Full Term Barrier, which can be breached during the investment term, in contrast to an End of Term Barrier, where only the level at the end of the term is relevant. The nearest barrier would only be breached if the index fell to a level below 3770.7, a drop of approximately 40% from current levels. This level has been seen in the last 10 years, but it is important to appreciate that this was during the height of the credit crisis correction in March 2009. Even if the FTSE collapses to below this level, investors in the respective product would only lose capital if the FTSE 100 failed to recover back to the starting level of the product, 6284.5, by 25 January 2019, the final maturity date of the plan. The nearest End of Term barrier to current market levels is even lower, at 3561.06, which is observed on 24 February 2017. It is therefore clear that extreme market falls would need to be seen before the original capital of any FTSE 100 linked product would be affected. StructuredProductReview.com. founder Ian Lowes says: “This quarter’s structured product maturities performance, delivered in volatile market conditions, may not be as impressive as previous figures however this needs to be considered in the context of the general investment market conditions. The two really poor performers highlight the risk of investing in products linked to esoteric measurements. Some are rewarded for taking on this additional risk, but others are not. Products linked to mainstream indices have performed well and it would be remiss to let this be overshadowed by the poor performing products. Structured products can be useful in tax planning with their defined returns on defined dates and with careful selection, using structured products as part of a diversified portfolio to offer contingent protection should the markets go south, while still being able to offer attractive returns in rising markets, makes sense.”
Written by
StructuredProductReview.com

How absolute return funds stack up against structured products